April babies get one of the most popular and most precious gemstones as their birthstone: the diamond.

The diamond is the traditional birthstone of April and holds significant meaning for those born in that month, thought to provide the wearer with better relationships and an increase in inner strength. Wearing diamonds is purported to bring other benefits such as balance, clarity and abundance. diamond jewelry is an ideal gift for a loved one born in April. As the gemstone with the highest rating on Mohs Hardness Scale, with a score of 10, diamonds have the unique ability to be cut and polished with the utmost brilliance. Their incredible shine and luster have captivated wearers for centuries. diamond add light and beauty to any occasion—especially birthdays!

HISTORY AND MEANING OF APRIL’S BIRTHSTONE: diamonds are billions of years old—in some cases more than three billion years old. There is evidence that diamonds were being collected and traded in India as early as the fourth century BC. In the first century AD, the Roman naturalist Pliny is quoted as having said, “diamond is the most valuable, not only of precious stones, but of all things in this world.” During the Middle Ages diamonds were thought to have healing properties able to cure ailments ranging from fatigue to mental illness. diamonds are the traditional birthstones for those born in April. However, it’s no surprise that diamonds are known as the “love” stone. The ancient Romans believed that Cupid’s arrows were tipped with diamonds (perhaps the earliest association between diamonds and romantic love). It is believed by some that diamonds enhance the longevity and honesty of relationships. Since they are the strongest of the precious gems, they are also thought to increase the wearer’s strength. Many ancient cultures believed that diamonds gave the wearer strength and courage during battle, and some kings wore diamonds on their armor as they rode into battle.

Round cut diamonds on black. 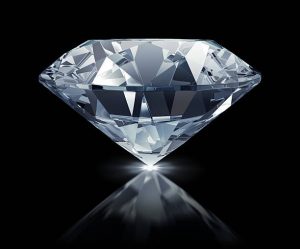 A blue diamond on a black background with reflection.

By continuing to browse or clicking 'Accept', you agree to the storing of cookies on your device to enhance your site experience and for analytical purposes. To learn more about how we use cookies, please see our, cookies policy.