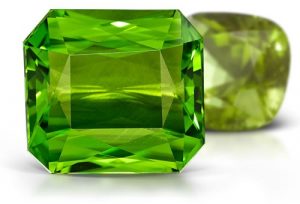 This gemstone is named after the French word peritot, meaning gold, because the mineral can vary towards this color. Peridot is the birthstone for the month of August. It is also the stone given to celebrate the 16th year of marriage. Peridot has a very long written history. Ancient papyri record the mining of these stones as early as 1500 BC. The main source of peridot in the ancient world was Topazo Island (now Zabargad or St. John’s Island) in the Egyptian Red Sea. In Ancient times, peridot stones were used for carved talismans. Island habitants were forced to collect the gems for the Pharaoh’s treasury. Legend says that jealous watchers who had orders to put to death any trespassers guarded the entire island. The story continues that the miners worked in the daytime as well as night, as the gems could be found after nightfall due to their radiance. The miners would mark the spot at night for retrieval the following day.
Peridot is the National gem of Egypt. Ancient Egyptians knew it as “the gem of the sun.” Peridot was mined for over 3,500 years on St Johns Island. As late as the 19th Century, the Kedhive of Egypt had a monopoly on the mines. At one point, the island’s exact whereabouts became a mystery for several centuries until being rediscovered in 1905. Joel Aram, from the “Color Encyclopedia of Gemstones 2nd Edition,” writes “Zabargad is an island in the Red Sea that is often shrouded in fog, making it difficult for ancient navigators to find. The location has been lost in fact, for centuries, and was rediscovered in about 1905. The island is located 35 miles of the Egyptian coastal port of Berenica.” In the 19th Century, the mines on Zabargad Island produced millions of dollars worth of peridot. After 1905, production of the gems peaked, but by the late 1930’s it tapered off to practically nothing and reached a virtual stand still in 1958, when the mines were nationalized. Although parcels of St. Johns peridot still come into the market once in a while, it is not known whether it is new or old. Most assume it is old.
Peridot is also very beneficial when it comes to treating psychological afflictions as well. It is a wonderful stone to help someone who is going through depression. It is a stone of lightness that counters the effects of negative emotions. It has the ability to balance the process of emotional release and detoxifies negative emotions, bringing them to comfortable levels. Peridot fosters emotional balance, security, and inner peace. It soothes nervousness, heals emotional and physical pain, and lightens suffering. Such usages date back to ancient Roman times when rings of peridot were worn to relieve depression. Because it is calming to the nervous system, peridot is also useful in promoting sleep. Peridot banishes lethargy, which can attack someone who is experiencing depression. The stone’s energy balances bipolar disorders and other forms of depression and helps one’s self esteem or bruised ego. It also brings about necessary change, which is much needed to someone who is depressed.
Peridot is a relatively soft stone, rating a 6.5 to 7 on the hardness scale, making it a little softer than amethyst or emerald. Peridot should be spared rugged wearing if mounted in rings. The stone is also highly sensitive to rapid temperature changes. Peridots can also lose their polish if they come in contact with commonly used hydrochloric of sulfuric acid.
the best and safest way for you to clean your peridot, is with warm, soapy water. You should take special care of your peridot to ensure that it does not come in contact with drastic temperature changes, which can damage the stone. You should also protect your stone from scratches and sharp blows and avoid any contact with chemicals. Peridots should not be cleaned in ultrasonic or steam cleaners.